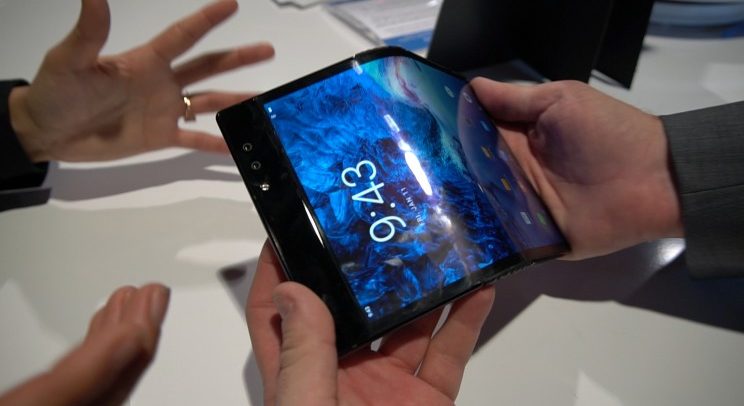 Smartphones with a flexible display are the talk of the town nowadays. After decades of consistency, there is a great breakthrough in the smartphone industry. Smartphones after facing evolution at many stages have now reached to a next milestone known as flexible phones. People are more excited about buying a phone that will support the flexible display. Many companies have been working and make an investment in the development of flexible phones and now they are ready for sales.
Samsung Galaxy Round was the world’s first flexible OLED display smartphone. 2020 is considered as the year of flexible display, especially flexible smartphones. According to an estimated shipment of the flexible display will hit a target of 6 billion dollars in 2020, making it 13% of the total display market. It offers electronic visual display that has a flexible nature, unlike conventional flat screens. These smartphones are equipped with the organic light-emitting diode that can produce like by its own.
Flexible phones are made up of material that is more durable and reliable. It reduces the chances of damage to your phone if you drop it. The screens are composed of a material that is more lighter in weight and slimmer in dimension. You can use it both as a tablet and a smartphone because of the latest flexible display technology. The growing interest of the clients is encouraging smartphone manufacturers to innovate new products. These flexible phones come in various shapes and sizes. Its screen is made up of plastic which is relatively lighter than glass. This phone supports multi-tasking feature as it has a big screen, you can easily manage to perform two or three functions at the same time. You don’t have to exit an app if you want to open another.

Smartphone users have a wish list that is there are specifications that they want on their mobile phone. It mostly includes a fast processor, greater storage, an excellent camera, durable screen, longer battery life, and a slimmer design. Few people know about flexible phones so the manufacturers will have to make more effort for the success of flexible phones. Secondly, soaring prices of flexible phones will hinder its way to compete with the top-selling flagship phones. Its higher price can be of great concern for many of those who want to buy it but can’t afford an expensive phone. Its price is much higher than many premium devices that offer a wide range of specifications at an affordable price.
Although, the phones are assembled with the lightest components yet it foldable and big screens adds to its weight making it a bit heavier. Phone manufacturers will have to face the challenge while ensuring the clients about the quality of the phones, especially about the flexible display. They will have a tough time to convince and gain the trust of the clients. There are some questions regarding the life span of flexible phones and it is thought that they might have to suffer during its early days.
Many smartphones manufacturers are playing with the latest technologies to develop and provide a polished and incredible device to their customers. Flexible screens are a sequel to this series. Enhanced features of smartphones facilitate the user to complete their work without the need for a laptop, although that level of convenience is not fully achieved. The size of screens is increasing day by day and now the flexible display is an addition to it. But there are certain problems with flexible phones. OLED screen display which provides a thin and flexible display consumes more power than the traditional display. It requires more protection since it is more sensitive to water and oxygen. Conventional Li-ion batteries are rigid in shape and they are not flexible, it limits the ides of fully flexible and bendable phones. Researchers have to find another material that is more elastic that will enhance this feature.

South Korean company Samsung has been in reports about its flexible phones. Samsung Galaxy Fold has a 7.3-inch QXGA Dynamic AMOLED display can be used as a tablet. The flexible display or foldable display converts it into a smartphone with 4.6-inch HD+ Super AMOLED external display. It has a fast 64-bit 7nm processor and 12 GB RAM that supports non-stop internet surfing at a higher speed. It also has greater memory storage that allows users to store up to 512GB of data in their phone. Its folding feature is exciting for technology lovers. Although it is very expensive yet it is attracting the people from every corner of the world. It supports 4G and its 5G version which will charge more than the 4G version will be available in the market soon.

Samsung Galaxy Fold has six cameras three on the back with 12-megapixel wide angle, 16-megapixel ultra wide angle, and a third 12-megapixel camera. Rest of three cameras are located at the front and inside of the phone. Along with its foldable display, it has the latest super-fast charging technology and a wireless charger. It operates on the Samsung One UI system with Android 9.0. It uses two batteries that give the power of 4,380mAh in total.
Its high price can limit the number of sales limiting the number of people to buy a flexible phone. Samsung Galaxy Folds memory is not extendable.

Huawei is very curious about the innovation of smartphones and Huawei Mate X is proof of this. Huawei has always been committed to provide the best services to its users. Huawei Mate X has a much bigger display of 8 inch OLED display and can be folded to use it as a smartphone with 6.6-inch. It has an amazing design with incredible features. It is a dual display device and both its side can be unfolded to have a wider screen display. Huawei Mate X will be available in Interstellar Blue color. It has four rear cameras and 8Gb of RAM. Like Samsung Galaxy Fold it has 512Gb of storage and supports an NM memory slot to increase the memory up to 256GB. Its Kirin 980 processor is able to support 5G networks. A combination of two batteries provides it a capacity of 4,500mAh.

It has a fast charger that can recharge your phone within no time without any interruption. A ten-minute recharge can give you a backup of the whole day. Huawei Mate has two nano-SIM card slots. Its microphone reduces the noise in the surrounding to improve thus improving the sound quality. It is fitted out with fingerprint sensor, color temperature, and light ambient temperature, and gravity sensors. You can unfold the phone in a second and jump to a wider screen. Huawei Mate X has captured the attention of clients before its release.

Like Huawei and Samsung other smartphone manufacturers like Xiaomi, Oppo, Lenovo, LG, and Royole are also working on the future of flexible, rollable and stretchable display.